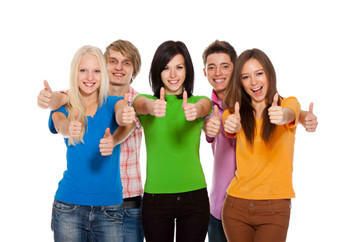 A mouse once took a bite out of a bull\’s tail as he lay dozing. The bull jumped up in a rage and, with his head low to the ground, chased the mouse right across the yard. The mouse was too quick for him, however, and slipped easily into a hole in the wall.

The bull charged the wall furiously again and again, but although he bruised his head and chipped his horns, the mouse stayed safely inside his hole. After a time the bull gave up and sank down to rest again.

As soon as the bull was asleep, the little mouse crept to the mouth of the hole, pattered across the yard, bit the bull again — this time on the nose — and rushed back to safety. As the bull roared helplessly the mouse squeaked:

\”It\’s not always the big people who come off best. Sometimes the small ones win, you know.\”

Tom is 16. he decides to leave home and joins a music company. His father hears that and angry, “Singer? My son? It’s disgrace!” he shouts, “What do they think of the neighbors know?”

“I will change my name,” Tom says. He thinks he will become a singer in the future.

“Change your name?” Tom’s father shouts angrily, “What if you’re successful? How will the neighbors know you are my son.?”

There is a naughty boy in a village. He likes telling lies. One day he wants to make fun of the farmers. So he shouts, “Wolf! Wolf! Wolf is coming!” The kind farmers are working in the field. They hear the shout, and hurry to help the boy. But when get there, the boy says: “There isn’t a wolf. I’m joking. The farers are angry and go back to their field. After a while the biy shouts again, “Wolf! Wolf! Wolf is coming!” And the farmers come and are cheated again. The boy laughs and laughs. They say, “You tell lies. We will not believe you.”

Later a wolf really comes. The boy is very scared. “Wolf! Wolf! Wolf is coming!” the boy shouts and shouts. “Help! Help!” But no one comes. And wolf eats the naughty boy.

A MISER sold all that he had and bought a lump of gold, which he buried in a hole in the ground by the side of an old wall and went to look at daily. One of his workmen observed his frequent visits to the spot and decided to watch his movements. He soon discovered the secret of the hidden treasure, and digging down, came to the lump of gold, and stole it. The Miser, on his next visit, found the hole empty and began to tear his hair and to make loud lamentations. A neighbor, seeing him overcome with grief and learning the cause, said, \”Pray do not grieve so; but go and take a stone, and place it in the hole, and fancy that the gold is still lying there. It will do you quite the same service; for when the gold was there, you had it not, as you did not make the slightest use of it.\”